Mine resides in a QB ONE case.
I stick to FUSDK to benefit from latest updates.
The lack of any repository is a bit painful of course.
But the famous scummvm compiles pretty well (after compiling sdl2 as well which is also simple)
See it below running the FREE (and awesome) game Lure of the Temptress.
Even audio via HDMI worked out of the box (with a radeon 9450 that however runs unstable and crashes after a while, replacing it with a RX550 soon).

I just finished my build:

It boots ok with the provided sdcard. I noticed it keeps trying to start the X server, which fails because there’s no GPU. Any idea how to stop that?

The first time I did that it crashed the machine, only a hard power-off worked. Now I tried it a second time a it works as I expected.

Some old reviews of your card suggest that the power consumption is around 40-50W, like this one that says 43W specifically.

HIS decided to jump on the bandwagon and releases a slightly customized R7750, it's named the HIS 7750 iCooler 1GB. As you can tell from the photo below the card is all customized, a nice blue PCB and a cooler, that though eats two slots, makes the...

I just put it into a 1U rack

Thanks for finding out the power consumption of the card @cavemanol, it isn’t very excessive indeed. I don’t have an other PC around to test with, but I might be able to do that next monday. It’s an old card, the fans are very noisy, so it might just as well be broken.

My first stumbling and bumbling youtube video (ever). Some co-workers interested in this board pushed me to do one.

I have crude audio/video equipment, a noisy environment, and do not have a radio voice…but it’s done. 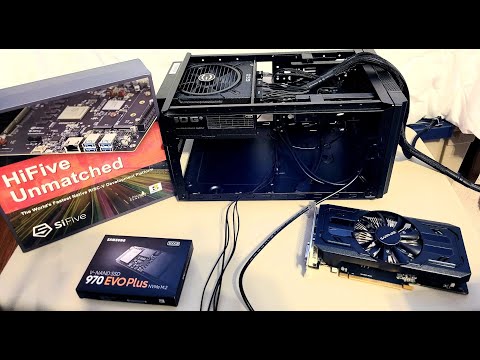 The build is running great now though. All the time wasted learning Shotcut and Audacity I can now spend on trying to compile some dev tools that are missing in this ecosystem.

this was a great video!

was the graphics performance worse on ubuntu vs openembedded?

(unfortunately, i havent been able to boot get ubuntu booting at all)

Thanks for the kind words. I honestly went straight to that Ubuntu image. I haven’t actually touched the card that came with the Unmatched.

My secondary monitor is using the VGA out of the sapphire directly to the port on the monitor (I have to switch inputs manually on my 2nd monitor).

I’m not really a benchmark kind of guy, but maybe I should look around and see what’s available to run. Maybe it’s “radeon” vs “amdgpu” after all, but I guess could be CPU throttling? I’m not sure of the nuances between X and Wayland as far as leveraging the GPU.

Sure, moving around in the UI is a bit sluggish, but I’m so eager to find out what is or is not available in apt that I haven’t given the graphics driver a second thought today. It’d be nice to see what’s going on and make things better there, but it’s not crippling my explorations of other things.

I really think the only seriously annoying perf issue I’m seeing is the one in Epiphany…which I’m pretty sure is the JS engine (not V8).

yes, i have no scientific evidence, but it seems to me the ui is not accelerated, and the js engine in epiphany seems to be missing some perofrmance (not using jit?)

other than that id say performance seems pretty acceptable

and ill try ubuntu again, glad someone was able to get it working on the first try!

and maybe sometime ill try to make a video too ^^

here is my desktop

hopefully next i could get obj-c / gnustep building…

I still haven’t tested the card, but i did test a different card (an old/passive cooled nvidia NVS300), and it worked. It showed me the console login and (of course) it showed up in lspci. It still tells me nothing about the other card, but it does prove the unmatched is ok.

Great looking build and good to see retroarch running snes games, I installed the one from the ubuntu repos and am currently getting an error stating “*** longjmp causes uninitialized stack frame ***: terminated”. I’ll check later for the actual wording, but i get that error when launching both snes and n64 games. Gba/gb games seems to run just fine. 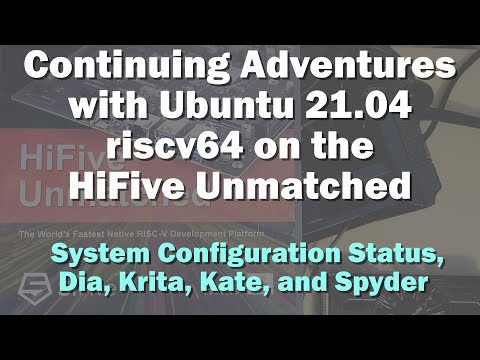